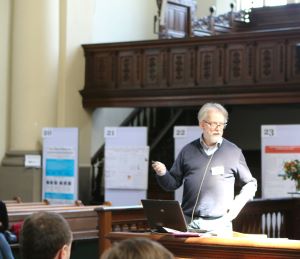 You can watch Russell Spears' key note lecture for the 2019 Heymans symposium here.

About the lecture: Almost 50 years ago Henri Tajfel demonstrated mere categorization into (minimal)groups on a trivial basis (e.g., a coin toss) was sufficient to produce intergroup discrimination. This effect has had a profound effect on our understanding of the power of groups that influenced evolutionary and economic theories as well as social psychology.

However finding the true explanation turns out to be like hunting for the culprit in a never-ending Agatha Christie murder mystery. I provide a historical journey through the various explanations notl east Tajfel’s preferred “socialidentity” account.

Despite trying to rule out self-interest, this keeps returning like the proverbial mummy that won’t die and I present some recent research suggesting that the first idea, dismissed by Tajfel has also risen from the dead.The true culprit is then revealed.

The 2019 Heymans symposium was held on Wednesday, April 10, 2019 in the Nieuwe Kerk in Groningen.

Prof. dr. Lisa Herzog appointed Dean of the Faculty of Philosophy at the University of Groningen

Elected Corresponding Fellow, British Academy and member of the Berlin-Brandenburg Academy of Sciences and Humanities