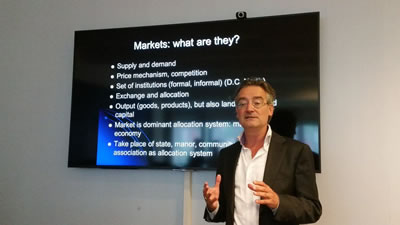 Bas van Bavel on The Rise and Fall of Market Economies

On Monday, March 27, 2017, 8 p.m., prof. dr. Bas Van Bavel will speak in the University of Groningen Studium Generale Series The End of an Economic Era?

The general notion is that market economies are modern and promote economic growth and welfare. Economic historian Bas van Bavel uses historical research to show that market economies are not modern, but have existed at various times in the past. They rise, stagnate, and decline. They initially generate economic growth, but their dynamism leads to the rise of new market elites who accumulate land and capital. In the long term, this creates social polarization and a decline of average welfare. Also, these new elites gradually translate their economic wealth into political leverage. Thus makes markets increasingly more unequal and less efficient, it contributes to economic stagnation and finally makes these markets stagnate or decline again. The end-situation is one of economic stagnation, material inequality and unfreedom, similar to the situation at the start of this cycle. This analysis enables us to better assess the situation in current market economies, the United States and Northwestern Europe. High levels of wealth inequality, increasing polarization, stagnating welfare and growing political leverage of the market elites indicate that we are over the tipping point towards the negative phases of the cycle. Is there a way out?

With a critical response by Nuno Palma, economic historian at the Faculty of Economics and Business of the University of Groningen